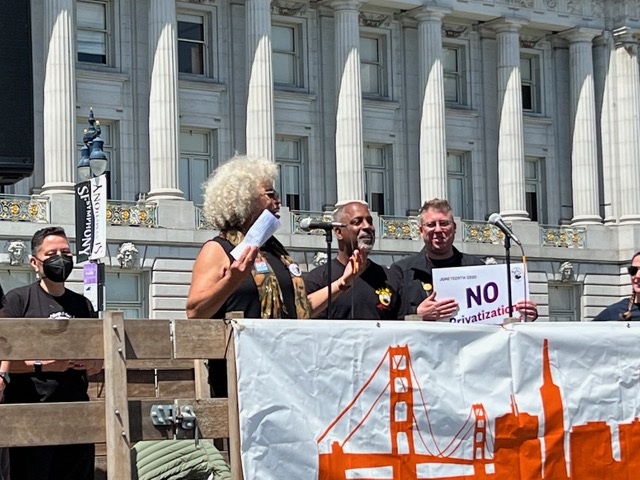 This week on COVID, Race, & Democracy, we celebrate May Day, May 1st, Workers’ Day around the world.

Thousands of Oakland teachers went on an unfair labor practice strike on Friday April 29th against the closure of 11 public schools in the Black and Brown community.
They were joined by the ILWU Local 10 longshore workers who had a stop-work meeting. They joined together in a rally at Oscar Grant Plaza at Oakland City Hall.
Later that day a labor community picket shut down the Port of Oakland for the night shift in protest of the privatization of the Port by billionaire John Fisher who also controls the KIPP and Rocket ship charter school chains.

Find out more and get involved at https://slapbayarea.org/.

The Heartland Labor Forum on 90.1 KKFI in Kansas City recently covered the role of the AFL-CIO and the US Central Intelligence Agency in the murder of a Mexico City Ford worker. Host Judy Ancel interviewed retired UAW president Rob McKenzie, author of El Golpe , US Labor, The CIA and the Coup at Ford Mexico.

The Amazon Labor Union (ALU) workers are now seeking to have another vote for the 1,500 workers at the LDJ5 plant. They rallied on April 29 to build support for their union vote. Mimi Rosenberg and Ken Nash of Building Bridges from WBAI, Pacifica Radio in New York bring us voices of ALU workers.

South African workers are fed up. At a Congress of South African Trade Unions May Day rally, African National Congress President Cyril Ramaphosa had to escape angry workers by leaving the stadium before his planned speech in the northwestern city of Rustenburg. Striking mine workers stormed the stage to protest exploitation by the mine owners and the government’s role in supporting the bosses. Amidst the rapidly increasing inflation, public workers haven’t had a pay increase since 2018.

Joe Thomson is a UC Santa Cruz student. He is part of a successful effort to organize the first Starbucks in California. He spoke at the San Francisco May Day rally.

Political Activist and author Angela Davis has become an honorary member of ILWU Local 10. She marched on May Day in San Francisco, and spoke about what May Day means for her.

We thank all of Pacifica’s sister stations and affiliates who contribute to the production of this show. Today’s program was produced by Steve Zeltzer. Our executive producers are Akua Holt, Polina Vasiliev, and Steve Zeltzer.

“The Guillotine”, The Coup

“Which Side Are You On”, Tom Morello