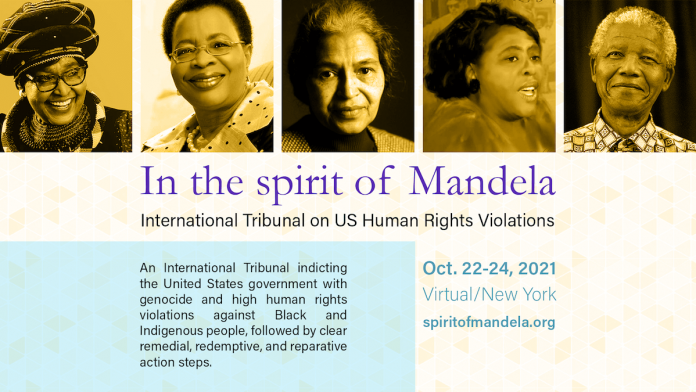 Co-hosts Bob Lederer, one of the producers of Out-FM covering anti-racist LGBTQ+ issues on WBAI in New York and Akua Holt, host of Pan African Journal on KPFT in Houston share excerpts of an historic people’s tribunal that happened from Oct. 22nd to 25th, 2021 in New York City.

Hundreds of human rights activists gathered in-person and worldwide virtually for the International Tribunal on Human Rights Abuses Against Black Brown and Indigenous Peoples. It was organized by the  In the Spirit of Mandela Coalition, created in 2018 – a multiracial group of organizers, academics, clergy, attorneys, and others.

The proceeding built on a long line of people’s tribunals and other efforts to internationalize U.S. human rights violations. The event was held at the Malcolm X & Dr. Betty Shabazz Center, former site of the Audubon Ballroom, where Black human rights leader Malcolm X was assassinated in 1965 after calling for the U.S. to be brought before the World Court.

The day after the testimonies, at the Church Center for the United Nations, a distinguished panel of international jurists, a majority of them women and rooted in the Global South, found the United States guilty of a variety of human rights abuses, including genocide.

We begin with part of the opening statement by the Chief People’s Counsel, Nkechi Taifa, an internationally acclaimed human rights attorney.  Nkechi has been a senior fellow at the Center for Justice at Columbia University, and is a member of the National African American Reparations Commission. She led a team of seasoned attorneys and Howard University law students who directed the two full days of testimony from over 20 impacted victims, expert witnesses, and professionals with firsthand knowledge and data raised in the five counts of the tribunal’s indictment.

Next, we hear a small sample of the testimony presented by the people’s attorneys to support the 5 counts of human rights abuses against Black, Brown and Indigenous peoples.

Melina Abdullah is a Professor and former Department Chair of Pan-African  Studies at California State University in Los Angeles. She is also a board member of the National Conference of Black Studies and a founding member of Black Lives Matter LA.

Saleem Robert Holbrook is Executive Director of the Abolitionist Law Center in Pittsburgh, Pennsylvania. He has also worked with the Center for Constitutional Rights and the National Campaign to End Solitary Confinement. Saleem testified about the systemic pattern of criminalization of people of color, especially youth, at levels far above any other country, and the legal structures that allow imposition of cruel, draconian sentences.

COUNT 3:  Political Prisoners and Prisoners of War by the U.S. and State Governments

The witness was himself a political prisoner for 49 years, Black Panther  Jalil Muntaquim.

Another former political prisoner released after serving decades was witness Oscar Lopez Rivera of the Puerto Rican independence movement. He starts by mentioning the charge of seditious conspiracy brought against him and 10 colleagues.

First we  hear from Nathan Phillips, an Omaha elder.  Then, Imani Jacqueline Brown, a researcher at the Center for Research Architecture at the University of London who has  worked for environmental justice at “Rise St James” in New Orleans, Louisiana presents testimony from the perspective of forensic architecture.

Dr. MaryLouise Patterson is a retired pediatrician affiliated with Weill Cornell Medicine, who is a board member of Physicians for a National Health Program in New York City. She opened with a tribute to her father for his key role in the trail-blazing 1951 petition to the UN titled “We Charge Genocide.” Dr. MaryLouise Patterson.

After two days of  witness testimony, People’s Attorney Nkechi Taifa summarized the case for the jurists. She emphasized the historical intent underlying all the particular charges of what she deemed institutional genocide against people of color in the U.S.

On October 25th , the panel of jurists unanimously found the United States guilty of all five counts, which they concluded fit well within the internationally-accepted definition of genocide.  We hear the reading of the  verdict, first by Chief Jurist Magdalene Moonsamy, former member of the South African parliament, followed by Sherly Fabre, Haitian-born UN representative of the International Fellowship of Reconciliation; and finally by ​​Kassahun Checole, Eritrean-born CEO of Africa World / Red Sea Press.

The reading is followed by comments by jurist Wilma Reveron Collazo, a long time leader of the  Puerto Rican Bar Association, and former Executive Director of the Puerto Rico Center for Research at  the UN.

As a triumphal note  for this historic tribunal, on the final day a Pennsylvania judge ruled that Russell “Maroon” Shoatz, 78, a member of the Black Liberation Army and Black Panther Party and a political prisoner since 1972, would be freed on compassionate release because of his stage 4 cancer. Days later, white anti-imperialist political prisoner David Gilbert, 77, was released on parole after serving 40 years in New York State prisons. The freedom of both men had been demanded by years-long grassroots campaigns. Campaigns continue seeking humanitarian release of other  elder political prisoners who have been mistreated in prison for, in some cases, up to five decades.

The Spirit of Mandela Coalition, which organized the tribunal, will use the verdict to organize across many social justice arenas to bring the findings of genocide to a much broader audience nationally and internationally.

MORE INFO ON THE TRIBUNAL

Full text of the Tribunal verdict is at: https://spiritofmandela.org/guilty-on-all-counts/

For more information on the Tribunal, go to  https://www.tribunal2021.com and https://spiritofmandela.org

and for an outline of follow-up steps to distribute and organize around the verdict, visit https://spiritofmandela.org/internationaltribunal/,

For background on the 2021 Tribunal, prior efforts to internationalize the issue. and major victories and losses in recent years for U.S. political prisoners, see https://covertactionmagazine.com/2021/10/18/in-the-spirit-of-mandela-international-tribunal-seeks-to-charge-u-s-government-with-crimes-against-humanity/

Flute music by Black longterm political prisoner Veronza Bowers, recorded over the phone from the federal prison where he’s been forced to live for many years.

Spoken word by Through the Walls troupe.

“I’m Gon’ Stand” by Sweet Honey in the Rock