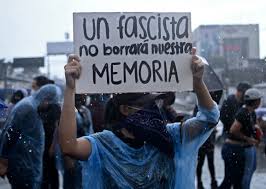 This week on COVID, Race, & Democracy, we look at the role of the U.S. government funded AFL-CIO “Solidarity Center” & The History of the AFL-CIO around the world.

The American Federation of Labor and Congress of Industrial Organizations (AFL-CIO) is the largest trade union federation in the United States. It says that it stands for democracy and Freedom.

The AFL-CIO receives $75 million through the National Endowment for Democracy for it’s Solidarity Center international operations.

Before the NED and “Solidarity Center” was set up, it operated in Latin America through the American Institute of Free Labor Development (AIFLD). Pacifica interviewed retired United Auto Workers  909 Local president Frank Hammer whose brother Michael Hammer was an AIFLD agent and was assassinated in El Salvador in 1980 along with another agent and a government agrarian reform official.

The history of the AFL-CIO International operations was exposed by former CIA agent Philip Agee in a documentary called “Inside the CIA: On Company Business”. In that documentary, the former President of the AFL-CIO George Meany denied that it was connected to the CIA.

David Hemson was one of the founders of the union that became part of COSATU, the Confederation of South African Trade Unions. He was imprisoned and had to escape the country. While many around the world were fighting apartheid the AFL-CIO was seeking to split the South African trade union movement.

Kim Scipes is a professor at Purdue University Northwest. His focus has been US Labor Imperialism. He has written about it in the Philippines and other countries. Hetalked with Pacifica’s Steve Zeltzer about the role of the Solidarity Center.

“Solidarity For Ever” by Pete Seeger

“The Magnificent Seven” by The Clash

“Which Side Are You On” by Florence Reece

What is the AFL-CIO’s Solidarity Center Doing in Venezuela: We Have a Right to Know!

Another type of trade unionism IS possible: The KMU Labor Center of the Philippines and social movement unionism

The AFL-CIO, NED & US Labor Imperialism With Kim Scipes

CIA and American Labor: The Subversion of the AFL-CIO’s Foreign Policy

Puerto Rico, The US & The Fight Against Privatization With Senator Rafael Bernabi  & Ricardo Ortiz