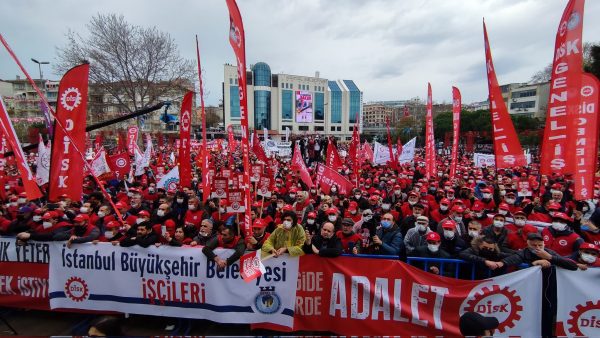 This week on COVID, Race, and Democracy:

Millions of American people who rely on Medicare face a massive privatization of this important healthcare system. The privatization has taken place under both Democrats and Republicans. Kate Tillow is with Kentuckians for Single Payer & Unions For Single PAYER. She spoke to Mimi Rosenberg and Ken Nash, hosts of Building Bridges on WBAI, New York.

Turkish people are facing a catastrophe as inflation rages out of control. Pacifica’s Mehmet Bayram reports on the fight for survival with a massive inflation rate of more than 21% in November alone. The working people and poor are facing deprivation as their currency, the Lira, is collapsing in value.

Despite billions of dollars going to transit agencies around the country, most of the managers and CEOs have refused to provide hazard pay for workers in the middle of a pandemic. Bay Area transit workers spoke out on December 4th at Oscar Grant Plaza in Oakland, California.

Workers from the Philippines came to California and the West Coast to work in the fields as a result of colonization. Mary Jane Galviso worked in California fields as a 13-year-old and came to know Communist agricultural organizer Larry Itliong. These Filipino workers were the organizers and leaders of the Delano strike in 1965 and this history has not been told. Interview by Steve Zeltzer.

A UK court has ruled to allow Julian Assange to be extradited to the US to stand trial on espionage charges. We hear from journalist Glenn Greenwald, speaking on the Jimmy Dore show about the threat of the Assange prosecution to press freedom.

“Magiting” is Musika Publiko’s tribute to the country’s brave health workers. A song recorded by about 50 Filipino musicians across the country and the world.

Democrats Have Taken Medicare For All Off The Table

Medicare Advantage and the Privatization of Medicare, An Advantage for Insurance Firms