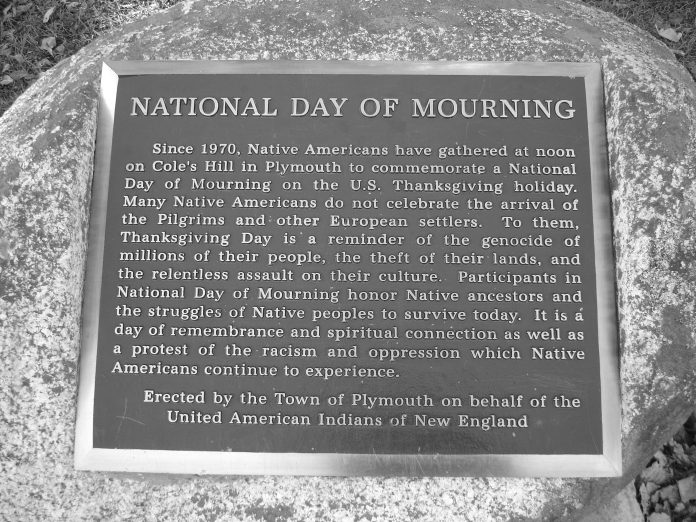 The National Day of Mourning is held on the fourth Thursday each year in November. It is also known as the historical myth, Thanksgiving.

In the show:
*Supporters of the Indian Child Welfare Act or ICWA rallied outside the Supreme Court after oral arguments were heard in the Brackeen v. Haaland case.
*Moses Brings Plenty is an actor and musician from the Pine Ridge Reservation in South Dakota. He spoke about our deep traditional relationship to the Horse Nation on November 4 at the elders luncheon of the National Congress of American Indians.
*From Voices of Resistance: a Collective of Women Fighters hosted by Lucy Pagoada-Quesada and Andrea Vizeu (WBAI), a conversation about Brazil’s President elect Luis Inácio Lula da Silva.
*Bill Means, Lakota founder of the International Indian Treaty Council and long time American Indian Movement activist in conversation with Dennis Bernstein (Flashpoints, KPFA).
*From Pacifica Radio Archives, in remembrance of John Trudell, poet, actor, musician and a powerful speaker, spokesperson for the United Indians of All Tribes’ takeover of Alcatraz island (November 1969 – June 1971).