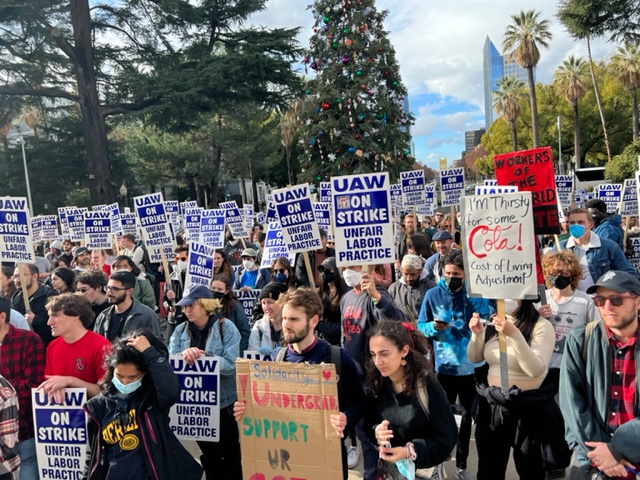 Listen to this week’s radio show:

Congress has passed a bill that imposes a contract without sick pay on railroad workers, and President Biden has signed it into law. They did so despite the fact that the railroad owners, including BNSF billionaire Warren Buffet, have profited hugely by downsizing the railroad workforce and increasing health and safety hazards for railroad workers and communities.

Pacifica’s Steve Zeltzer spoke to Cliff Smith after the Biden agreement was imposed by Congress.

After more than three weeks on strike, 48,000 University of California workers remain angry that California’s university system refuses to pay living wages and make sure they have housing. They are demanding a cost of living adjustment to keep up with inflation.

Neither the University administration nor the UC Regents, who are appointed by Governor Gavin Newsom and former Governor Jerry Brown, have come out in support of the strikers’ struggle.

Last week the UC UAW bargaining Team argued that since the University wasn’t budging they had to drop their demands to get the administration to negotiate. This has led to a growing anger among the strikers. Here are some of their statements at a statewide meeting of strikers last week, protesting the concession bargaining and the 10 to 9 vote by the bargaining committee to make major concessions on their demands for a Cost of Living Adjustment and housing.

Pacifica’s Steve Zeltzer interviewed Evan Wartel, a psychology graduate student  at UC Davis and Tate LeBlanc and PhD. student in developmental  psychology at Riverside who are both on strike.

The European Union is seeking to set up a tribunal to prosecute Russia for war crimes. Pacifica’s DeBar spoke to attorney and U. of Pittsburg international law professor Dan Kovalik.

The Los Angeles County Sheriff’s Department has been plagued by a history of violence, with more than five decades of abuse, terror, and murder carried out by deputy gangs. According to a 2021 report published by The Center for Juvenile Law & Policy at LMU Loyola Law School, the L.A. County Sheriff’s Department has a long history of deputies forming secret subgroups at stations in minority communities. Some of these subgroups have tattoos, hand signals and rituals that are similar to a criminal street gang. Cerise Castle is a reporter for Knock LA and she conducted an extensive investigation into this issue.  She spoke to KPFK’s Ziri Rideaux.

And that concludes today’s edition of Covid, Race & Democracy. We thank all of Pacifica’s sister stations and affiliates who contribute to the production of this show. Today’s program was produced by Akua Holt, Polina Vasiliev, and Steve Zeltzer and hosted by Akua Holt.

A classic by Isaac Hayes Café Regio’s” from Shaft