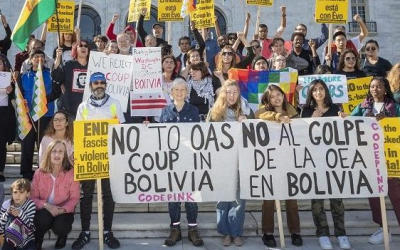 *In California, App companies spend nearly $200 million dollars on an effort to defeat an initiative designed to protect drivers rights. Steve Zeltzer brings us voices of protesters against Prop 22.

*If Biden wins, and Trump refuses to submit to an orderly transfer of power, labor unionists are ready to threaten a general strike.

*And indigenous people of Bolivia went to the polls on Sunday to cast their votes with an overwhelming tendency to support the Movement Towards Socialism (MAS). Observers ask: will the US and its European allies respect the results of this election after they supported the coup d’etat against the winners of the last one?

Dr. Martin Luther King once said, “Voting is the cornerstone of political action.”  Craig Washington, former 18th district Congressional representative of Houston, TX, explains to Dr. Obidike  Kamau (KPFT), why the practice of voter suppression continues to be a challenge in Harris County. Washington was elected to the seat once held by the late humanitarian and Congressman Mickey Leland. Segment produced by, Akua Holt, co-executive producer of CR & D.

“At a time when far too many eligible voters are wrongly turned away from the polls – or simply don’t have access to them – we must rededicate ourselves to increasing participation among eligible voters.  Visit Common Cause.org for more information on your RIGHT TO VOTE.

Black History in the Making: Reclaiming Our Past, Re-defining Our Future: A CONVERSATION WITH NIKKI GIOVANNI

Black History in the Making: Reclaiming Our Past, Re-defining Our Future: FREE THEM ALL!

Black History in the Making: Reclaiming Our Past, Re-defining Our Future: FROS, BERETS, AND LEATHER JACKETS