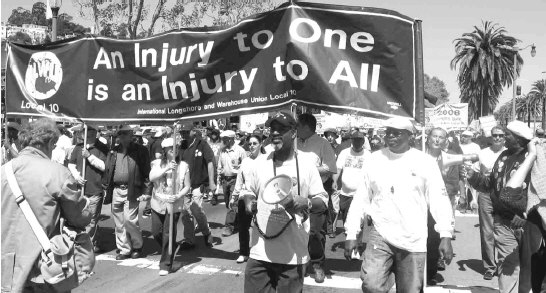 May Day, May1st, is International Workers Day. In this week’s show we hear from working people from across the globe. Many are facing new challenges because of the COVID-19 pandemic.

We dedicate this program to healthcare worker and ER technician Breonna Taylor who was murdered last year in her home by Louisville Police.

Thousands of trade unionists and supporters of May Day rallied in San Francisco. It included all Bay Area Labor Councils and it was led by Angela Davis, author, scholar, and activist, and Trent Willis, president of the International Longshore Workers Union, ILWU Local 10.

In 1992, Labor historian Howard Zinn, gave a talk on the Hidden History of the US Working Class. Some of that talk is shared here.

Under President Jair Bolsonaro, Brazilian workers are facing catastrophic consequences of the COVID-19 pandemic. Fabio Bosco, a Sao Paulo transit worker and member of the independent trade union federation Con Lutas, talks about the pandemic and the government’s responsibility. Listen to a longer interview by Steve Zeltzer here.

The economy of  Argentina faces a growing threat of bankruptcy and is, yet again, virtually under control of the International Monetary Fund.  Argentine Workers Party leader Guillermo Kane reports on the struggles of working people and unions in this contest.

New York CWA Cablevision techs recently went on strike for a union and produced a rap song about their struggle for justice on the job. Unfortunately their union efforts were defeated and the strike was broken.

Bill Clause is a volunteer producer at KKFI Community radio in Kansas City Missouri. He is a labor activist who has collaborated with labor artists . He was a close friend and associate of the great labor songwriter singer Anne Feeney. He offers a tribute to Ms Feeney.

Links to additional audio and video