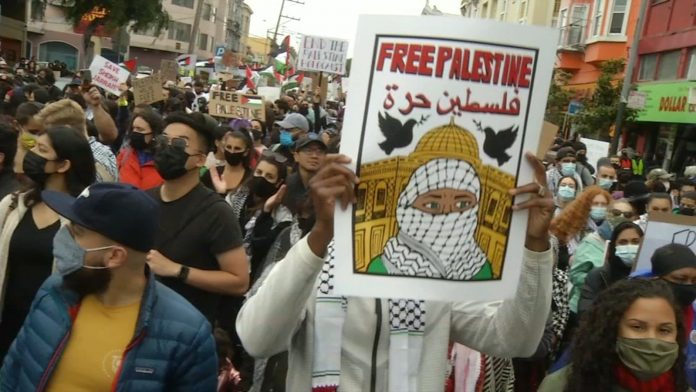 From Pacifica Radio, this is Covid,  Race and Democracy, a collective effort by producers from the Pacifica Network and radio affiliates. In this week’s show we hear voices of solidarity with Palestine on the 73d anniversary of the Nakhba, when over 750 thousand Palestinians were expelled by massacre from their homeland. We also review some history.

I.  Israel has been emboldened by ex-president Trump’s recognition of Jerusalem as its capital, and allies in the region have fallen in line. Settlement expansion has ramped up, but Palestinian resistance to colonization and displacement hasn’t stopped.

To understand the so-called Israel Palestine conflict, we must first understand the colonial imperialist settler project behind Zionism. Ralph Schoenman is the author of “The Hidden History of Zionism.”Listen to his full talk here.

II.  Rasha Anaya and Laura Albast are activists with the Palestinian Youth Movement. They spoke to WPFW Producer and “On the Ground” host Esther Iverem.

IV.  Pacifica affiliate KKFI-Kansas City, on their show “Understanding Israel and Palestine,” spoke with Dima Khalidi, director of Palestine Legal, about attacks on the free speech of Palestinians and critics of Israel.

V.  Professor Rabab Abdulhadi is the Chair of the San Francisco State University Arab & Muslim Ethnicities & Diasporas (AMED) program. She discusses how her department has been attacked by Zionists, who have accused her and her students of being terrorists. She also reports on Zoom, Facebook and Youtube shutting down her webinars.

VI.  Abby Martin, journalist and producer of the Empire Files, has faced first hand the effort to stop her from speaking out about the Palestinian struggle and the boycott of Israel. She spoke to Pacifica/KPFK producer Polina Vasiliev. Check out her recently released feature documentary Gaza Fights for Freedom.

Ralph Schoenman, author of “The Hidden History of Zionism”
https://youtu.be/08wDBXgfPU8