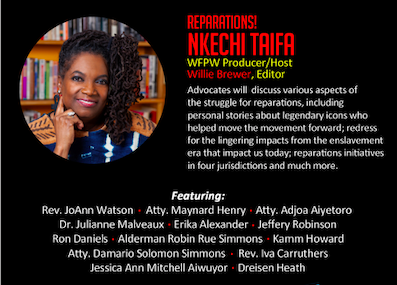 Host Nkechi Taifa (WPFW) brings us voices of a multitude of advocates discussing various aspects of the struggle for reparations, including personal stories about legendary icons who helped move the movement forward; redress for the lingering impact from the enslavement era that affects us today; reparations initiatives in four jurisdictions and much more. The time to seriously consider reparations for Black folk has finally come.

Jeffery Robinson ” Deputy Director, American Civil Liberties Union; Producer of “Who We Are: a Chronicle of Racism in America“

Black History in the Making, Reclaiming our Past, Re-defining our Future

Produced in collaboration with the Pacifica Covid Task Force, the production team of Covid Race and Democracy, Pacifica Network Stations and affiliates throughout the country.