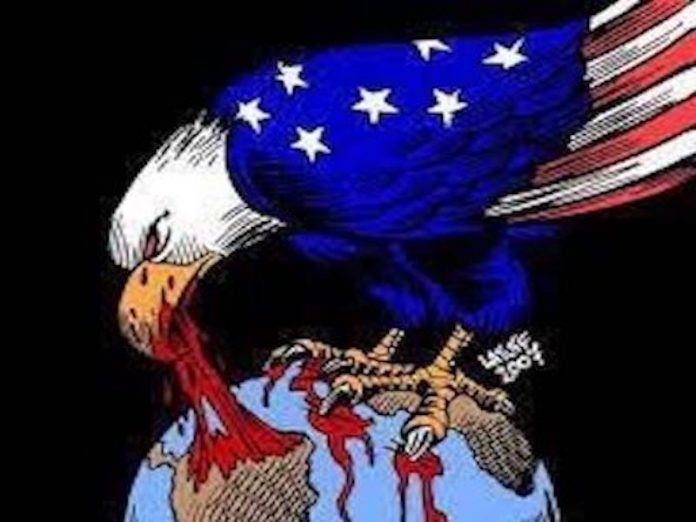 This is Part 2 of a four-part series on imperialism, which chronicles how U.S. imperialism and its allies are fueling intensifying existential crises for humanity and all life on Earth, and how anti-imperialist movements and nations are fighting back for a more humane future.

In Part 1, we defined imperialism as an advanced stage of capitalism, where the ruling classes of a few of the wealthiest countries dominate the rest of the world’s nations and peoples in order to control and profit from their natural resources, their labor and their markets.  We highlighted that the U.S. was founded on settler colonialism, genocide, slavery, conquest, and white supremacy, which are all still deeply rooted in U.S. institutions, policies, and culture.  We saw how the primary forms of imperial control and domination changed after World War II to incorporate neocolonialism, neoliberalism, and regime change wars.  You can link to Part 1 here.

In Part 2, we examine the ways imperial domination by the U.S. and its allies increasingly relies on multi-dimensional hybrid warfare. Hybrid warfare includes not only military wars, but also the weaponization of economics, information, agriculture, technology, law, etc.  In this episode, we’ll see how U.S. imperial strategy today is targeted most intensively against the “Great Powers” that refuse to abide by imperial dictates, (e.g., China, Russia, Iran); nations that resist surrendering their natural resources to profit Western capital (e.g., Syria, Libya, Iraq); or those who attempt to develop alternative models to neoliberal capitalism (e.g., Cuba, Venezuela, Nicaragua).

U.S. imperial efforts to maintain global hegemony have unleashed a counter force of people and nations fighting for their right to self-determination.  This makes for both a more dangerous and a more hopeful world, according to international human rights activist, Ajamu Baraka.  He frames this episode of “Covid, Race, and Democracy” in conversation with Pacifica producer Esther Iverem.  Ajamu Baraka is the national organizer for the Black Alliance For Peace, a Black Agenda Report editor, the 2016 Vice Presidential candidate of the Green Party, and a leader of both the U.S. Peace Council and the United National Anti-War Coalition.

Sanctions are a weapon of economic warfare currently imposed on approximately one third of humanity by U.S. imperialists and their allies, in violation of international law. They are especially egregious in a time of global pandemic, resulting in millions of the planet’s most vulnerable people being denied essential health care, food, and basic necessities.  Activist and pediatrician Dr. Margaret Flowers, a director of Popular Resistance, presents this tutorial produced by the Sanctions Kill Coalition, with the accompaniment of revolutionary musician Gil Scott Heron.

Segment 3: Fanning The Flames of War With China

Yesterday’s lies about Iraqi weapons of mass destruction have been replaced by today’s propaganda blaming China for genocide and the global pandemic.  The U.S. is already at war with China, and it’s escalating towards a shooting war.  K.J. Noh is the Special Senior Correspondent for the Asia Pacific on KPFA’s Flashpoints program, and he writes for Counterpunch, Monthly Review, Black Agenda Report, Dissident Voice, and other progressive publications.  He spoke with Pacifica’s Ken Yale about the U.S. “strategic pivot toward Asia,” focusing on the relationship between the U.S. and China.

Segment 4: Covering Up One Of The Biggest Pro-War Propaganda Scandals Ever

The United Nations has been investigating allegations that the Organization For The Prevention of Chemical Weapons (OPCW) released fraudulent reports that indicated the Syrian military used chemical weapons on its own people.  These reports were then cited as justification for aerial bombing attacks on Syria by the U.S., U.K., and France.  Corporate and “progressive” media have largely been silent or complicit, despite extensive evidence from internal OPCW whistleblowers and documents.

Pacifica’s Ann Garrison speaks with Aaron Maté, an Izzy Award-winning journalist and contributor to The Grayzone and The Nation, who has testified twice at the UN about this alleged coverup.

Segment 5: Food And Hunger As Weapons Of War

Dr. Vandana Shiva says that U.S. agribusiness and foreign policy have combined to undermine international food sovereignty and create global hunger in order to extract megaprofits and control the world’s nations.  Dr. Shiva is a physicist, environmental activist, feminist, and founder of Navdanya, a movement for biodiversity conservation and farmers’ rights. She is also the founder and director of the Research Foundation for Science, Technology and Natural Resource Policy, and a winner of the Right Livelihood Award.  This excerpt was uploaded by Food Farmer Earth.

Israel’s May, 2021 bombing of Gaza killed more than 250 people, including 66 children. A growing global solidarity movement with the Palestinian struggle is demanding an end to Israel’s system of occupation, ethnic cleansing and apartheid, and an end to U.S. military funding to Israel.  Calls are building for a renewed campaign of boycotts, divestment and sanctions to target the apartheid state. On May 29, 2021, tens of thousands of Palestinians and their supporters converged on Washington, D.C. for the National March for Palestine.  In this segment, we hear Zeina Ashrawi Hutchison, a Palestinian activist from the Virginia Coalition For Human Rights, who was among the speakers.

The march was covered by Esther Iverem for “On The Ground: Voices of Resistance from the Nation’s Capital,” which originates from WPFW Pacifica Radio in Washington, DC. To hear her complete coverage of the march, including more speeches, side rallies and interviews, click here.

This program was co-produced by Esther Iverem, Polina Vasiliev and Ken Yale, and hosted by Esther Iverem, with help from Ann Garrison. Iverem is creator, producer and host of “On The Ground: Voices of Resistance from the Nation’s Capital, “ a podcast and weekly radio show carried by more than two dozen stations on the Pacifica Radio Network. https://onthegroundshow.org/

The executive producers of COVID, Race, and Democracy are Akua Holt, Polina Vasiliev, and Steve Zeltzer.