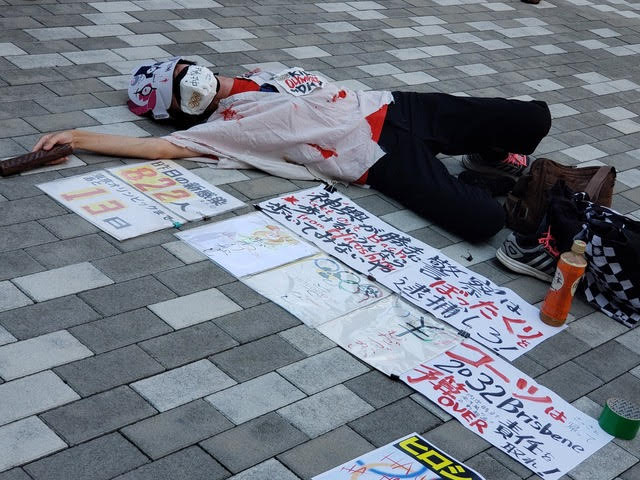 This week the Tokyo Olympics will be opening amidst an ongoing world pandemic and a massive increase in COVID-19 cases in Tokyo.
Despite this dangerous and deadly situation, the Japanese Prime Minister Suga’s administration and the International Organizing Committee for the Olympics, with support from the Biden administration, are pushing ahead with the event.

At the same time, the Fukushima nuclear facility, 10 years after the nuclear disaster, along with the Japanese government, is threatening to release one million tons of radioactive water into the Pacific Ocean. Is this criminal insanity consistent with holding the Olympics in the middle of a pandemic? Is money behind the need to have the Olympics with no visitors?

Chieko Shiina is a former organic farmer in Fukushima who began to fight the government’s plan to restart nuclear plants throughout the country.

Tsukuru Fors is with the Pacific Asian Nuclear-Free Peace Alliance. At the Japanese Consulate in San Francisco, on June 11, she said that the Japanese government is endangering the whole world by holding the Olympics during a pandemic.

Professor George Wright (emeritus, Chico State College) is an expert on Class and Race in sports from the Super Bowl to the Olympics. He spoke with KPFT Pacifica hosts Akua Holt and Steve Zeltzer about the business and politics behind the Tokyo Olympics.

Black athletes who have won their way into the Olympics are also being pressured to refrain from speaking out about systemic racism in the US. Pacifica Affiliate WBPU Black Power FM 96.3-St. Petersburg, Florida and the People’s War Radio show look at the Eugene, California track and field trials.

Eric Sheehan is with NOlympics LA.

The Pandemic & The Tokyo Olympics

Cancel the Tokyo Olympics to protect our lives

David Rovics, “Once This Pandemic Is Over”