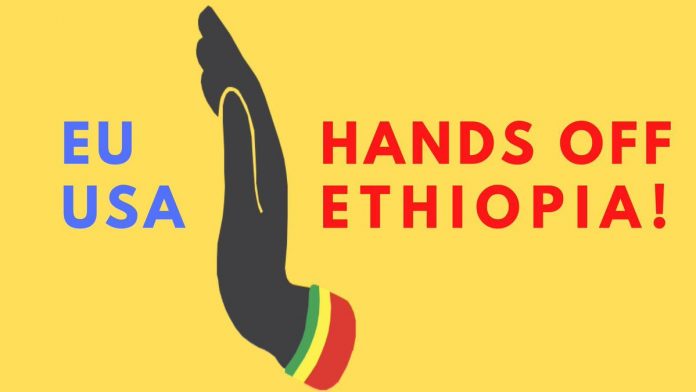 In this show we consider heightening tensions and the US insistence on global hegemony, as manifest in the Horn of Africa, and, particularly Ethiopia, a nation of 117 million people, the second most populous on the continent, with one of its fastest growing economies.

Ethiopia is the center of the Horn, bordered by the smaller nations Eritrea, Djibouti, and Somalia, to the East, Kenya to the South, and Sudan to the West. Its stability is essential to that of the Horn and the wider region.

From 1991 to 2018, the Tigray People’s Liberation Front, or TPLF, tyrannized the Ethiopian people, practicing a divide-and-rule strategy of ethnic division, competition, and polarization that included ethnic identity cards and ethnolinguistic states.  At the same time, the TPLF served as a key US military partner and proxy, most notably by invading and destabilizing Somalia, but also by dispatching troops as needed by AFRICOM, the US Africa Command.

The TPLF was finally ousted by a popular uprising that brought Prime Minister Abiy Ahmed to power in 2018, and a year later, Prime Minister Abiy won the Nobel Prize for negotiating peace in a longstanding border conflict with neighboring Eritrea.  But, the US foreign policy establishment missed its former regional proxy, and, lo and behold, the former proxy attacked a federal army base in Tigray, its own six percent ethnolinguistic base, on November 3rd, 2020.

Prime Minister Abiy responded, as any sovereign head of state would, by sending federal troops into Tigray, where a civil conflict ensued for 8 months leading up to the current uneasy ceasefire.  Some have called this a secessionist war, and the TPLF sometimes suggest that they plan to secede, but Article 39 of the Ethiopian constitution, which the TPLF largely wrote, grants any of Ethiopia’s nine ethnolinguistic states the right to secede by following legislative and referendum procedures that don’t include attacking a federal army base.

Throughout the conflict, Western press and officials have characterized the Tigraian people as victims of genocide, war crimes, and crimes against humanity and rallied support for humanitarian intervention, even though their former proxy, the TPLF, started the war.  Host and producer Ann Garrison spoke to legal scholar and University of Illinois law Professor Francis A. Boyle about Ethiopia and international law.

The dominant Western press, notably the New York Times, Washington Post, BBC, Guardian, and Al Jazeera, all engage in what has become a readily recognizable genre of unsubstantiated atrocity reporting deployed to manufacture consent for censure, sanctions, international criminal indictments, and perhaps even war against Ethiopia, as they have against Libya, Syria, Venezuela and other antagonists of empire.  Pacifica’s Polina Vasiliev spoke to Eritrean American Simon Tesfamariam about his New Africa Institute publication “Disinformation in Tigray: Manufacturing Consent for a Secessionist War.”

Listen to the full conversation with Simon Tesfamariam here:

Despite Ethiopia’s internal conflict and external threats, the Grand Ethiopian Renaissance Dam, the largest hydroelectric power project in Africa and the seventh largest in the world, is expected to begin producing power later this year. The dam promises to lift Ethiopia’s subsistence farming majority from poverty, make Ethiopia a regional powerhouse, and deliver electricity to neighboring nations. However, the dam is under heavy military guard due to a 10-year dispute with Sudan and Egypt over water rights to the Blue Nile River, which flows downstream from Ethiopia’s Lake Tana to Sudan, Egypt, and the Mediterranean. In one of President Trump’s last reckless moments in office he threatened to help Egypt blow up the dam.

Last week the UN Security Council met to consider a draft resolution put forth by Egypt and Sudan that would call on Ethiopia to halt the second seasonal filling of the dam underway now.  Everyone called for a return to African Union negotiations, despite a 10-year impasse, but statements made by the Egyptian and Sudanese Foreign Ministers, and the Ethiopian Minister of Water and Irrigation were less than conciliatory. The UNSC may vote on the resolution this week, but deadlock between the five permanent members with veto power is all but certain. Ann Garrison spoke with Mohammed Basheer, a civil engineering professor at the University of Manchester, about the Grand Ethiopian Renaissance Dam.

We close with a song from Ethiopian Oromo singer, songwriter, and civil rights activist Hachalu Hundessa. His music was central to ethnic Oromo protests which contributed to the downfall of the last TPLF Prime Minister, Hailemariam Dessalegn, in 2018. His 2020 assassination caused widespread protest among the Oromo ethnic group.

Special thanks to the Pacifica Covid Taskforce.