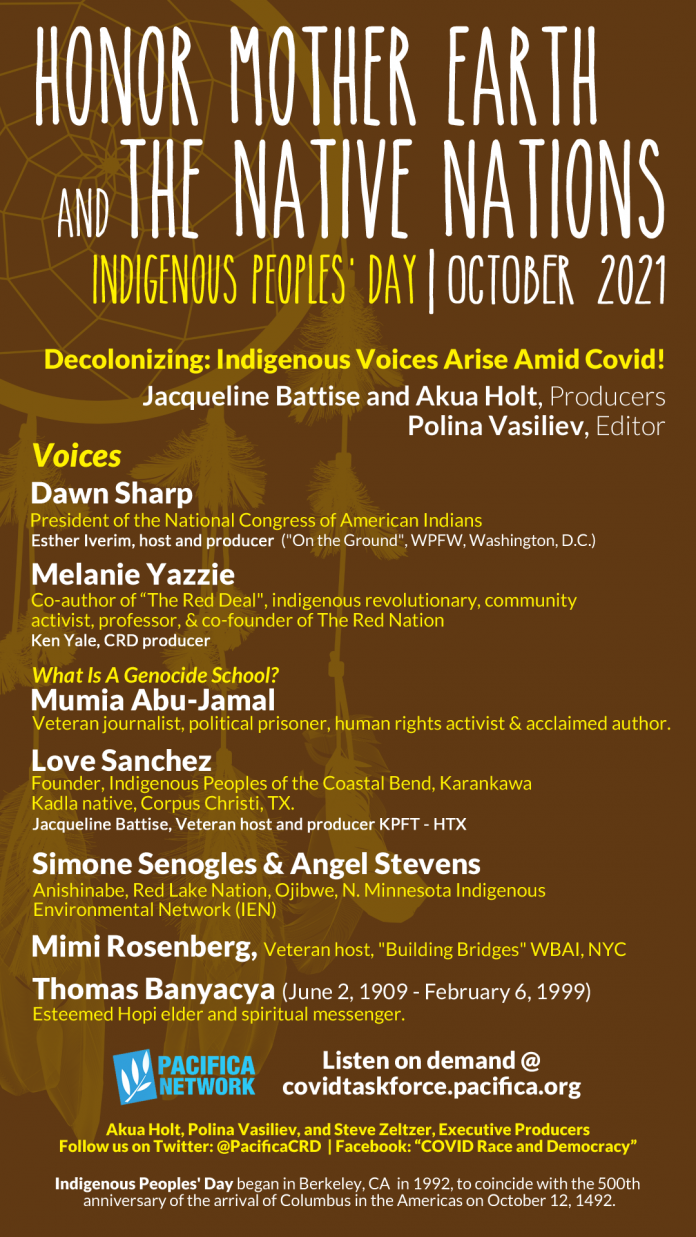 “If people ignore the spirituality that surrounds everything, which helps them correct themselves when they err towards each other, and if they use invention destructively, then nature will turn against them with extreme weather, volcanoes and big winds”

BIDEN is the FIRST PRESIDENT TO COMMEMORATE INDIGENOUS PEOPLES’ DAY with a proclamation. He stated in a speech on Oct. 8, 2021, “the Nation celebrates the invaluable contributions and resilience of Indigenous peoples, recognizes their inherent sovereignty, and commits to honoring the Federal Government’s trust and treaty obligations.”

We Don’t Need Performative Proclamations, Our Communitie s Are Dying

Since taking office, Biden has consistently fallen short of protecting the water that sustains all life on Mother Earth and continuously failed to honor our treaties. He has disregarded tribal nations’ consent by ignoring tribal nations, like Red Lake and White Earth, who have been fighting Enbridge’s Line 3 pipeline for years. We have had enough of your empty words. Our communities need clean water, land returned, divestment from the fossil fuel industry, and healing from residential school traumas.  Proclamations don’t erase the police surveillance of Indigenous peoples standing for our land and water, beatings and imprisonment for those trying to stop pipelines, fracking, LNG, uranium and other extractive industries from devastating our ecosystems and our bodies and violating our rights.    – Indigenous Environmental Network (IEN)

Indigenous Peoples day began as a counter-celebration held on the same day as the U.S. federal holiday of Columbus Day. Columbus represents “the violent history and horror of colonization on the original people of the Western Hemisphere   It was instituted in Berkeley, California, in 1992, to coincide with the 500th anniversary of the arrival of Columbus in the Americas on October 12, 1492.

Dawn Sharp, President of the National Congress of American Indians spoke at a historic gathering of Native Nations at the National Mall on July 29th, 2021, to demand an end to treaty violations and protections on sacred sites. A blessing ceremony took place for a 25ft totem pole carved by the Lummi Nation house of carvers, the totem pole has been presented across the nation where there are strongholds of Indigenous resistance. Produced by WPFW’s Esther Iverem, host of the national broadcast On the Ground.

The Red Deal: Indigenous Action To Save Our Earth

You’ve heard of the Green New Deal, but how about “The Red Deal?”  Melanie Yazzie co-authored The Red Deal, a revolutionary program to fight environmental catastrophe and secure a livable future for humanity and the planet, published in April, 2021.

From Albuquerque, she spoke with Pacifica producer Ken Yale about The Red Deal, The Red Nation, and the significance of Indigenous Peoples Day.

Listen to the full interview with Melanie Yazzie here:

Prison Radio is an independent multimedia production studio producing content for radio, television, and films for 30 years and distributing throughout the world. Prison Radio’s mission is to include the voices of incarcerated people in the public debate.

“To the Dakota people, Coldwater Springs, Mni Owe Sni (Minnesota), is a place of healing, gathering and ceremony. The springs are northwest of Bdote and are home to Unktehi, the God of Waters. Coldwater Springs is now managed by the National Park Service as a tourist attraction and the Dakota people must acquire a permit to hold ceremonies there.” – Sacred Land Film Project

Love Sanchez is from Corpus Christi and she co-founded a nonprofit group, the Indigenous Peoples of the Coastal Bend. The Karankawa were said to be extinct. Now they’re reviving their culture — and fighting to protect their ancestors’ land.

Museum of the Coastal Bend

“Archaeologists found tens of thousands of artifacts on the land near Moda Midstream’s expanding oil export terminal. The Karankawa people lived      along the Texas coast including Corpus Christi Bay for several centuries before Europeans arrived in North America. The Karankawa Kadla community — more than 100 people who have connected through a Facebook group and a smaller council that leads community organization — is now fighting to protect a stretch of undeveloped land that juts into the east side of Corpus Christi Bay, sandwiched between a residential community and an oil company’s export terminal. The area was once a bustling village where hundreds of Karankawa people gathered each year during the cooler months to live and fish. Those ancestors left behind tens of thousands of pottery sherds, arrowheads, tools fashioned from shells, and more.” -The Texas Tribune

Thomas Banyacya was born June 2, 1909. He was selected as spokesman for traditional leaders in 1948, after the atomic bombings of Hiroshima and Nagasaki in Japan by U.S. forces, which triggered Hopi awareness that the prophesied “gourd full of ashes” had finally appeared. According to a 900-year-old religious tradition, the Great Spirit Maasau’u, Guardian of the Earth, assigned the Hopi the duty of preserving the natural balance of the world. The deity also entrusted the Hopi with a series of ominous prophecies warning of specific threats and providing guidance on how to avoid them. The others were David Monongye, Dan Evehema, and Dan Katchongva. Banyacya was a member of the (Wolf, Fox, and Coyote clans.)  While many Hopi were accepting the ways of the white man, Banyacya tried to remain true to ancient values. He spent seven years in jail rather than fight in the Second World War because, “Hopi” means “peaceful” or “virtuous”  and he vehemently rejected fighting in wars, especially for another nation.  Elder Banyacya transitioned to the ancestral realm on February 6, 1999.

“A fierce opponent of uranium mining and a variety of other industrial assaults on the environment, Mr. Banyacya warned that an endless quest for material wealth would destroy the balance of the world; yet he did not reject all modern conveniences. His United Nations address and several other messages. Mr. Banyacya, whose work was supported by donations, traveled widely in the United States and abroad, something that was made a bit tricky by his refusal to apply for an American passport. It was a reflection of his spiritual appeal that he managed to attend several foreign conferences using a Hopi passport encased in buckskin.”