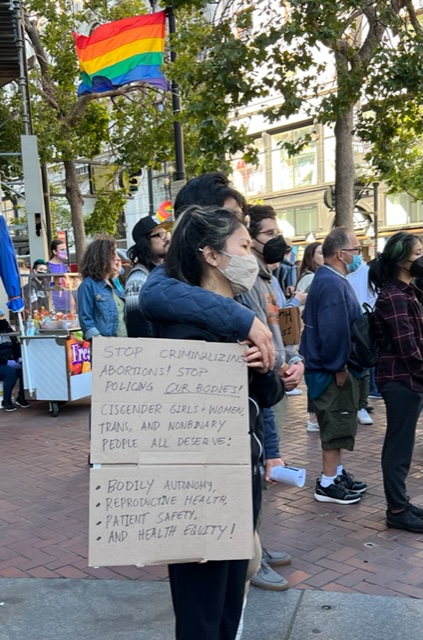 Protests have taken place across the US since the Supreme Court overturned the 1973 Roe v. Wade decision that the Constitution guaranteed women’s right to choose whether or not to carry a pregnancy to term.

Producer Steve Zeltzer brings us voices of people who took to the streets in San Francisco on the day of the decision.

On June 11, during the AFL-CIO convention, Frank Hammer hosted a panel about of the AFL-CIO’s international operations and their relationship with the CIA and National Endowment For Democracy.

Former UAW 909 president Frank Hammer has worked in solidarity with injured General Motors workers in Colombia, where there has been an 11-year encampment outside the US Embassy, and with Mexican GM workers in Silao. They recently won an election against the old corrupt union CTM.

Frank’s brother worked for the American Institute of Free Labor Development (AIFLD) and was assassinated during the war in El Salvador in the 1980s.

On Thursday June 23 people gathered outside Rep Barbara Lee’s office in Oakland to protest her recent vote for $40 billion more dollars for the war in Ukraine. The demonstration was called in conjunction with the International Day of Action for Peace in Ukraine called by the Peace in Ukraine Coalition.  There was a companion demonstration on the same day at the Northampton, MA, office of Rep. Jim McGovern, who also voted for the $40 billion, and accompanied House Speaker Pelosi on her recent visit to Ukraine.

According to the organizers, “this massive funding package represents a clear escalation of the war in Ukraine by the government of the United States, using the Ukrainian people as cannon fodder in a proxy war with Russia.  The funding pours fuel on the flames of that war.  It will prolong the war, resulting in thousands more Ukrainian and Russian deaths, at the very least. And this funding is one more step in escalating and widening the scope of the war – up to and including nuclear war.”

From June 8th to 10th, the People’s Summit for Democracy hosted three days of art, music, speakers, debates, workshops, panel discussions, and performances to imagine a new world that puts people’s democracy first. The event was held at the Los Angeles Trade and Technical College. The People’s Summit was organized to counter Joe Biden’s Summit of the Americas, which excluded Cuba, Nicaragua, and Venezuela.

We hear from Brian Becker of the Answer Coalition speaking on the final day of the event.  Venezuelan President Nicolas Maduro addressed the People’s Summit of the Americas by video link, also on June 10th.

Ethiopians have been in shock since hundreds, possibly thousands of innocent civilians were massacred in an Amhara populated area of Oromia Regional State, Ethiopia, on June 18. CRD’s Ann Garrison spoke to Nebiyu Asfaw, an activist with the Ethiopian diaspora in Denver, Colorado, who organized a Denver vigil for the victims, one of many held in cities around the world.

We thank all of Pacifica’s sister stations and affiliates who contribute to the production of this show. Today’s program was produced by the executive producers of CRD, Akua Holt, Polina Vasiliev, and Steve Zeltzer and hosted by Ann Garrison.

“Class War,” by the Dils