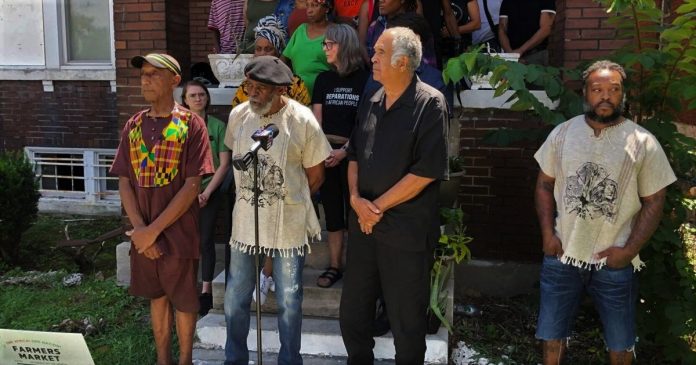 This week on COVID, Race, & Democracy…

Chairman Omali Yeshitela, of the African People’s Socialist Party, founded in 1972, and members of the Uhuru Movement held a press conference to speak out about a violent raid by the FBI with flash grenades, drones, battering rams, and assault rifles. Phones and computers were seized, and service was shut down approximately 5 a.m. Friday, July 29. Yeshitela said the raid was performed without a knock and without him seeing a search warrant.

The Tampa Bay Times reports that federal law enforcement and St. Petersburg police performed searches at multiple locations, including the Uhuru House in Florida, due to an indictment against a Russian national. The indictment does not explicitly name Yeshitela or the African People’s Socialist Party but describes two co-conspirators as residents of St. Petersburg, Florida and St. Louis. Yeshitela said he visited Russia in 2014 as part of a conference organized by a Russian organization that dealt with an anti-globalization movement in Russia, but his involvement with the country did not extend beyond that. The Russian national is charged with conspiring to have U.S. citizens act as illegal agents of the Russian government. He is not in American custody.

The African People’s Socialist Party was founded in 1972 and its stated aims and objectives are “to lead the struggle of the African working class and oppressed masses against U.S. capitalist-colonialist domination and all the manifestations of oppression and exploitation that result from this relationship.“

The National Alliance Against Racist and Political Repression said, “We must always be vigilant about defending our democratic rights to organize and speak out against injustice – including communicating with activists in other countries and building international solidarity. It should also be said this repression comes in the context of upsurge of struggle in the Black community.”

Eritha ‘Akile’ Cainion is a Uhuru group leader in St. Petersburg, Florida. She says that the failure of the US government and the US imperial system is at the core of the FBI attack against this political group.

There is a long history of Black leaders wrongfully attacked for unproven ties to Russia. Dr. Martin Luther King, Jr. was harassed and suspected of being a Communist and an agent. Similar allegations were leveled against Malcolm X, Langston Hughes, Paul Robeson, and the Black Panthers. The Uhuru Movement, founded five decades ago by Chairman Omali Yeshitela, stated at a news conference on Friday, “We’ve never taken money from the Russian government. But I’m not saying that because I’m morally opposed to taking money from Russians or anyone else who wants to support the struggles for Black people.”

Yeshitela said the U.S. government was using his group as a “pawn” in its propaganda war against Russia The Uhuru Movement falls under the African People’s Socialist Party.

None of the Uhuru members, whose houses were raided by the FBI, have been accused of any crime.

Ethiopia has begun a national dialogue process intended to reconcile its 80 ethnicities and preserve the integrity of the country. Ann Garrison reports.

Over 900 United Auto Worker union delegates gathered in Detroit last week to attend the Constitutional convention, a major theme of the convention was internal reform. The union is currently being monitored by federal authorities due to a series of corruption trials since their last Convention held in  2018 where twelve UAW officials, including two past Presidents of the International Executive Board (IEB) were convicted of embezzling union funds.

One reform instituted under the Monitor – spearheaded by the Unite All Workers for Democracy (UAWD) reform caucus, was the conduct of a referendum where UAW members overwhelmingly voted for “One Member, One Vote” meaning that each union member could vote directly for IEB positions including the International Union’s Presidency.

The key issues addressed by this caucus and other delegates was to reject tiers and stand with the fundamental labor principle of “Equal Pay for Equal Work”; to significantly increase the amount of weekly Strike Pay, which advocates payments should begin on Day 1 of a strike.

CRD’s reporter, Thomas O’Rourke of WPFW, traveled to Detroit and interviewed numerous Convention delegates and guests. He spoke to Lashawn English, a UAWD member and UAW Local 1264 president who is running for UAW Region 1 Director.

Presidential candidates Will Leyman of UAW Mack local 677 and Bryan Keller of UAW 1248 spoke out about the corruption scandal that forced a change in the constitution that allows rank and file  members to run for top offices with a one member, one vote policy.

Pacifica’s Steve Zeltzer spoke with former retired UAW 909 president Frank Hammer about McDonald’s wages in auto and the refusal to invite Mexican GM Salao workers to the convention by the UAW International.

In 1914, the US military invaded and occupied the independent country Haiti, as reported by the commander of the U.S. Marine Corps, General Smedley Butler. Thousands of Haitians were killed. The U.S. Marines did not leave until 1934.

On the eve of the U.S. invasion and occupation of Haiti, US Marines walked into the National Bank of Haiti and stole Haiti’s gold reserves, and carried them to the coffers of First National City Bank, now at 55 Wall Street in Manhattan. Haiti’s gold has never been returned. CitiBank is currently worth about 327 billion dollars.

Mitchel Cohen of Pacifica Radio WBAI, New York, was there and interviewed activists on the ground.

Pioneering actress Nichelle Nichols, who starred as the communications chief Uhura in the original “Star Trek” franchise in the 1960’s made her transition on July 30 in Silver City, N.M. She was 89, according to her son Kyle Johnson’s post on social media. Ms. Nichols selected the name Uhura, which she said was a feminized version of a Swahili the word for “freedom”. Her memoir, Beyond Uhura – Star Trek and Other Memories was published in 1994.

We thank all of Pacifica’s sister stations and affiliates who contribute to the production of this show. Today’s program was hosted by Akua Holt and produced by the executive producers of CRD, Akua Holt, Polina Vasiliev, and Steve Zeltzer.

Pharaoh Sanders  You’ve Got to Have Freedom