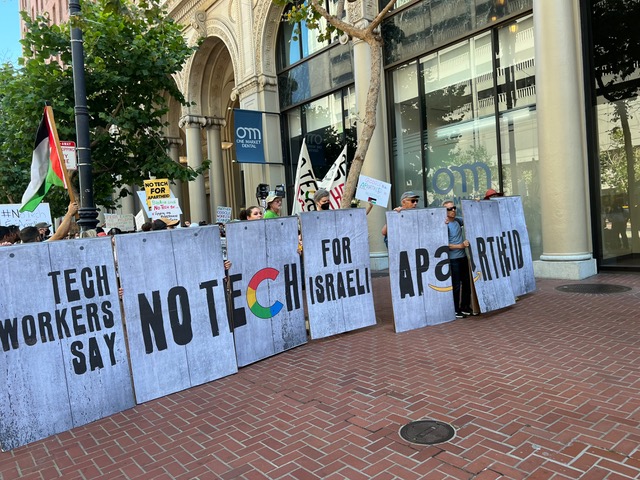 Listen to this week’s COVID, Race, & Democracy from Pacifica Radio:

This week Google workers and other tech workers and activists rallied in San Francisco, Seattle and Durham, North Carolina to demand that Google cancel Project Nimbus, its $1.5 billion dollar contract with Israel to control and spy on the Palestinian population. Pacifica covered the rally at Google and Amazon headquarters in San Francisco.

This week is also the 49th anniversary of the September 11th coup in Chile, which was organized by the US and the AFL-CIO’s American Institute For Free Labor Development. Labor historian and Indiana University professor emeritus Ruth Needleman was in Chile 6 months prior to the coup. She spoke with Pacifica.

Rwanda and Uganda’s M23 militia have returned to the Democratic Republic of the Congo, once again slaughtering Congolese people to seize territory and plunder their resources. To understand this, we have to return to March 2013, after M23 had been terrorizing DRC’s North Kivu Province for a year. At that time, the UN Group of Experts on the Democratic Republic of the Congo reported that Rwanda and Uganda, but most of all Rwanda, were commanding and supplying M23.

The UN Security Council then created a Combat Force Intervention Brigade within the UN peacekeeping operation to drive them out. Usually, the UN Peacekeepers’ task is simply to protect civilians, but the Combat Intervention Brigade had an unprecedented combat mandate—to work with the Congolese army to root out M23. They succeeded, under the heroic leadership of Congolese Colonel Mamadou N’Dala Moustapha, but the “international community” then engineered a negotiated “peace” that handed the victory to Rwanda, Uganda, and Colonel Mamadou was tragically assassinated. I asked Maurice Carney, Executive Director of Friends of the Congo about the return of M23.

According to the Mississippi AFL-CIO’s President and Secretary Treasurer Robert Shaffer, the dirty water crisis in Jackson, Mississippi is part of a long history of state corruption and deterioration of the state’s infrastructure. It’s also connected to public workers’ working conditions. Pacifica’s Steve Zeltzer spoke to Robert Shaffer.

At the end of 2021, the United States had 93 commercial nuclear reactors at 55 nuclear power plants in 28 states. Biden and the Democrats’ new infrastructure bill or inflation reduction act makes millions of dollars available to increase the life of these aging reactors.

In California, Governor Gavin Newsom and the majority Democratic legislature passed a bill to extend the life of two reactors at the Diablo Canyon Nuclear Power plant in San Louis Obispo for five years each. The Diablo Canyon plant has long been cause for alarm because it sits on the San Andreas Fault.

The language in the bill was not released until August 18 and the legislature voted for it nearly unanimously in the early morning of Sep 1.

On top of the federal subsidies, the bill provides the private utility Pacific Gas & Electric with $1.4 billion of state money to keep the plant open and includes new taxes on ratepayers and homeowners who have solar installed. The plant is built on the San Andreas Fault, where an earthquake could create another Fukushima disaster.

On August 29, the Coalition for Nuclear Safety and Committee to Bridge the Gap participated in a press conference to announce their plans to challenge the bill. We hear first from Cathy Iwani of the Coalition For Nuclear Safety and Daniel Hirsh of Committee To Bridge the Gap on their opposition to extending the life of the two reactors at California’s Diablo Canyon Nuclear Power Plant.