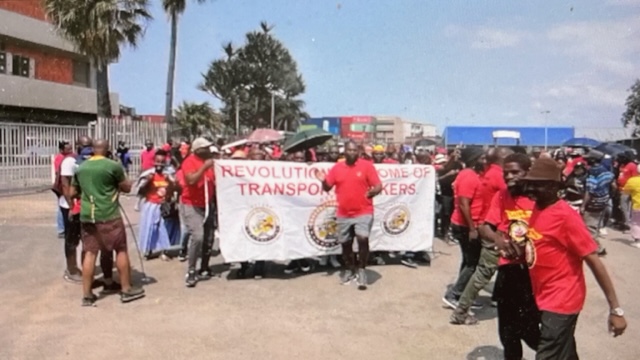 In Los Angeles, Labor leader Ron Herrera and City Council President Nury Martinez have resigned after protesters demanded justice and accountability for Martinez’s racist and inflammatory anti-Black and anti-Indigenous remarks in a leaked private meeting. Herrera, Martinez, Councilman Kevin de León, and Councilman Gil Cedillo, were meeting to promote Latino political power by gerrymandering the city’s political districts, to the exclusion of Black political power. De León and Cedillo have not yet resigned.

Council President Martinez on DA Gascón: ‘Fuck That Guy…He’s with the Blacks.’

Last week thousands of South African dock workers hit the picket lines in a national strike against the majority state owned Transnet corporation which runs the Ports. They are demanding major wage increases and are also fighting privatization and contract labor. We hear from JV Dube,  general secretary of the Revolutionary Transport Union Of South Africa, and Dave Hemson, an organizer in the 70’s of Durban dockers and one of the founders of COSATU, the Congress of South African Trade Unions.

Next, a report on the fight against natural gas pipelines, from Mitchel Cohen of WBAI Pacifica Radio in New York.

As part of a national week of action, more than 70 rallies are being held in the US and around the world sponsored by the United National Antiwar Coalition (UNAC) to protest the growing US and NATO war in Ukraine.

On October 15th, antiwar protestors rallied at the Oakland Federal Building to speak out against the US proxy war with Russia in Ukraine, the tens of billions of dollars worth of weapons that the US is pumping into the war, and the growing threat of nuclear war.

For more information on rallies to be held this week of October 15, visit the website of the United National Anti-war Coalition, unacpeace.org.

And that concludes today’s edition of COVID, Race, & Democracy. We thank all of Pacifica’s sister stations and affiliates who contribute to the production of this show. This week’s show was produced by Steve Zeltzer, Polina Vasiliev, Thomas O’Rourke, and Ann Garrison.