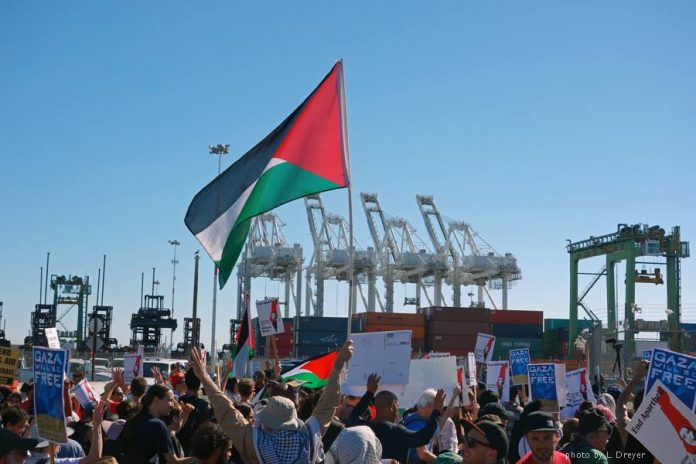 In todays edition of Covid, Race and Democracy

From Pacifica Radio, this is Covid, Race and Democracy, a collective effort by producers from the Pacifica Network and radio affiliates. In this week’s show we hear voices of the community and longshore workers on a picket line in the Port of Oakland to stop the unloaiding of the Israeli ZIM ship Volans. We also hear from ILWU president Trent Willis and other longshore workers about why they are abiding by the picket line. Pacifica Producer Steve Zeltzer was at the picket line on Friday when the blockade took place.

We next hear about the new job of former President Obama Secretary of Labor Tom Perez who was also chair of the Democratic Party. He was interviewed by Arnie Arnesen speaking to Andrew Perez at WNHN-LP in Concord, New Hampshire. The full interview is available at www.wnhnfm.org under the PROGRAMS link.

We also hear about the workers in Namibia, on Africa’s southern Atlantic coast, who are facing not only the COVID pandemic but also an attack on their union, the Mineworkers Union of Nambia. Last September China National Nuclear Corporation, the owner of the Rossing Uranium Mine, fired the entire 9-member union leadership when they refused to concede their healthcare benefits and opposed the import of Chinese workers to replace Namibian workers.

Next we hear about the role of the AFL-CIO in the formation of unions in Turkey with Pacifica producer Mehmet Bayram and the role of USAID in funding the entire budget of pro-US unions in the country.

Last we hear from KPFA producer Ann Garrison about Ethiopia a nation of more than 112 million, at the center of the geostrategically critical Horn of Africa. It has fallen out of favor with the US foreign policy establishment since a 2018 uprising that overthrew the Tigrayan People’s Liberation Front junta and put Prime Minister Abiy Ahmed in power.

This show was hosted by Vi Patel of KPFT and edited by Nick Cooper.
It was produced by Pacifica’s Steve Zeltzer
Executive producers: Akua Holt, Polina Vasiliev & Steve Zeltze

BHM – Reclaiming our Past, Re-defining our Future, A Reckoning with Reconstruction – June 14, 2021